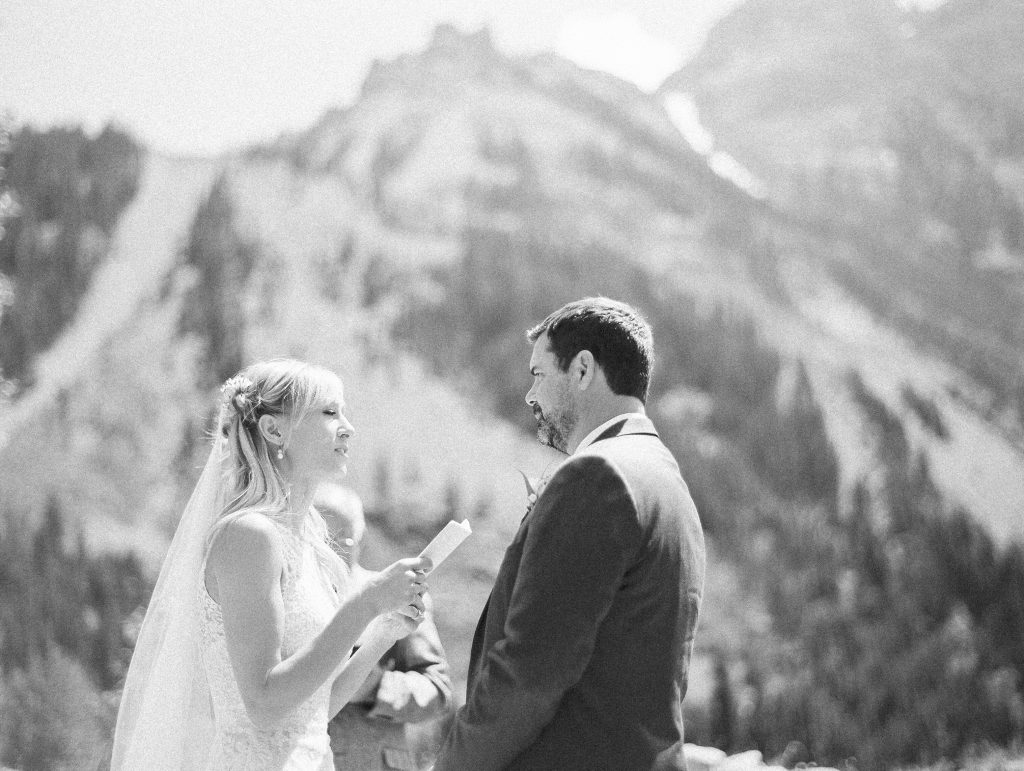 I can’t believe how quickly the time has been going by since our wedding day! We’re at nearly a month right now, and I can’t decide if it feels more like just days, or half a year! I feel like I’ve learned so much since I married DJ, but at the same time like there wasn’t nearly the adjustment I was led to believe there would be. More on that later, but right now I just wanted to write down some of my thoughts before they start fading around the edges.

It was perfect. More than anything else, that’s what I remember about our wedding day: its sun-soaked dreamy perfection. So much of it is just hazy impressions and feelings. My first “real” memory was that morning when I heard DJ’s voice downstairs. He’d come by to pick something up and was trying to be in and out quickly and quietly because according to tradition, the groom isn’t supposed to see the bride before the wedding. But I heard his voice and I flew down the stairs in my dressing robe to see him, and that is one of my most favorite moments of the entire day.

It rained, and this pushed back the ceremony a good half hour. But it worked out incredibly well because we’d gone a bit overtime with the getting-ready photographs! DJ and I had planned to have a First Look before the ceremony, and this is one thing I am INCREDIBLY happy that we did! His face when he saw me is one of my most treasured memories and I will never, ever forget that moment. It took all the pressure off of us, because as no one was watching we were under no obligation to “perform” and could simply be ourselves and soak in the moment with each other. I’m not going to lie, I’d had butterflies up until that moment. The moment he turned around, though, and I saw him, I was ready to say “I do” right then and there! It absolutely crystallized in that moment: I am his and he is mine, and he is my future.

His face when he turned and saw me in my gown for the first time is probably my clearest memory of the entire day. Everything before and after that is a bit of a blur. I know I didn’t wait for my musical cue before I rushed off down the aisle to DJ, and part of me wishes I’d waited because my song was literally so gorgeous, but another part of me loves the fact that I was so eager to be DJ’s wife that I couldn’t wait.

Everyone asks what you’d do differently. I can honestly say it wouldn’t be much. I would have tried to focus more on people than things. I tried so hard to keep everything low-key and relaxed, but I think the empty space of not having plans locked firmly into place stressed out more people than it removed pressure. It was perfect for me, but with my heightened sense of empathy I not only picked up very quickly onto the stress of other people, I took the responsibility of it upon myself. So I ended up a stressed-out bride after all! Oops. COMMUNICATION, ya’ll.

Ok, fine. Two things I would have changed. BUT JUST TWO.

-MY VEIL WAS IN BACKWARDS AND NO ONE NOTICED until Heather did after the ceremony. I think about this little detail (hopefully literally NO ONE NOTICED) far too much. It was also twisted which is pretty obvious in many of the pictures but oh well. I have to keep reminding myself it really doesn’t matter, anyway. 🙂 But yes, if I could have changed the veil I would have chosen one with more fullness at the top so the wind wouldn’t twist it so badly. And put it in the right way. 😛

-NO ONE PRAYED. We were supposed to have a time of prayer and blessing over us and our marriage and everyone gathered around us, but literally NO ONE PRAYED AND IT WAS AWFUL. If there is ONE THING I COULD DO OVER it would be this. We had discussed it with the pivotal people beforehand – obviously the most important being the pastor, who was supposed to start and end the prayer time but he was dead silent and so was everyone else. I thought that the pastor was just taking his time but the silence settled….and went on…and on… and I felt this MASSIVE WAVE OF PURE PANIC rise up in me and DJ felt it because he squeezed my hands and whispered, “they’re praying silently,” which I am SO glad he did because otherwise I’m certain I would have burst into hysterical tears. Honestly, I still want to cry when I think about it. This was literally one of the most important moments of the ceremony to me and it was just skipped. There are no words for the level of my disappointment here. But I guess we’ll just have to go with “they’re praying silently,” because that’s way better than thinking no one wanted to bless our marriage. I still feel that panic welling up inside me when I think about it…so I try not to. haha

Are there things I would have done differently? Yes. I’m going to be honest, and admit that yes, there are things I wish could have been different. But in the grand scheme of things, none of them matter.  It was mostly exactly the way I had envisioned it. Our wedding was beautiful and gloriously wonderful and it felt like God was smiling down at us.

I get to be married to this amazing man, and life gets better every single day. Life is good.

This site uses Akismet to reduce spam. Learn how your comment data is processed.

I love this picture of me. Not because it’s a pe

I must have accidentally taken this picture becaus

Me, stepping onto the beach in Hawaii: “ooh! The

Marrying him was, and I quote, “the best fun cho

JUNE 2 // this month I will This prompt makes me

June 1: start with a selfie Okay, so I’m riffin

If you forget a book on the airplane You’ll get

I feel like a poem, I told DJ tonight(two nights a